Welcome LGBT author Jay Gordon to the blog. We’re talking about his favorite book and things that go bump. 🙂 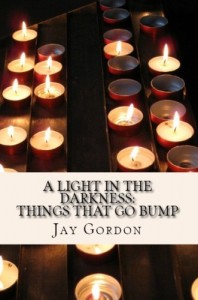 My favorite book? Easy answer: The Lord of the Flies. Sometimes. Regularly, The Master and Margarita supplants it. Except of course when I’ve recently read The Human Comedy. Of course, The Divine Comedy is actually my favorite. So long as we’re speaking of literature proper and not my great love, philosophy.

Much harder than this would be to answer the question, “Which of my own works is my favorite?” The answer to this question should be relatively straightforward, as I’ve published only one volume, the first in a series, A Light in the Darkness: Things that Go Bump. But things aren’t quite so simple.

I began my journey as a writer in private, as a method of working through my own ideas and, as you might expect if you pick up Light and have a read, demons. For a philosopher obsessed with the idea of evil, my writing became a laboratory for playing out the abstractions that teased me, concepts that slipped away when I wasn’t looking. My fiction also presented me with a laboratory for my inner psychologist: just as chemists put substances together with a catalyst to see what happened, I began to do this with characters under various forms of pressure. Pieces of myself became distinct individuals, and my inner struggles became interpersonal conflicts!

After years of toying, I was still unable to share my work. I didn’t feel as if I had anything worth sharing. But one winter holiday, I gathered courage, or perhaps I was just moved by curiosity and loneliness as I enjoyed Jewish Christmas in the Bible Belt! I still couldn’t share things I’d labored over, so I sat down and wrote something entirely new to the world and posted it immediately, unedited, to a notorious repository of male/male fiction. The “story” was simply a two-page scene, a dark evening encounter between a monstrously beautiful young man, and a scared young jock. It wasn’t even clear to me at that time that I was writing a vampire story: it was all about mood.

Perhaps it was the holiday – Christmas and other family holidays leave far too many gay men with a lot of lonely time on their hands – but I received an immense amount of encouraging feedback, mostly raving about the mystery. Where would the encounter lead? At the time my answer was, “Your guess is as good as mine.”

The end result was a sweeping supernatural tale set in a world complete with its own social organization and its own rules, created to house a story of destined loves (too destined to the taste of some, but check out Books II and III when they come – there is strife aplenty) and the cosmic and local battles between good and evil. I brought everything I have and love to this book: medieval Catholic doctrines and demonology, neoplatonism, Judaism and Jewish mysticism, political philosophy, and the violin. I even invite Dante in for a flashback – I do love The Divine Comedy

More importantly, I did ultimately pour myself into each and every character. Even the bad guys are good because I am a neoplatonist and believe that everything is at least a little good. And even the good guys have (increasingly in Books II and III) a touch of bad, because I deeply distrust the human animal. Too many of my characters were abused: but gay children,I experienced, are disproportionately touched by this spectre. Light in the Darkness is my favorite book because it’s all me, all the time.

My second book, Devil’s Gambit (June 2013), centers on a similar struggle between light and darkness, but everything is more subtle and nuanced, I think. It inhabits its own world, with distinct rules. Light is less self-conscious about “greying” its heros and fomenting discordant relationships, and thus the series begins, in this sense, naively. Or as naively as a book about a sympathetic demon, altruistic vampires, and annoying angels can. That naivete slips away, however, in Book II of the series (late summer 2013), and will be butchered in Book III. Parts of Light still leave me verklempt as I reread them: As I edit Book III, there are parts I can scarcely bear.

Still, Light makes me cringe when I see so much of myself on the page. I considered writing that I love Devil’s Gambit best, because it’s a more distant mirror. I hate mirrors, and saying that I love something that is so much a reflection of myself makes me uneasy. And, dear reader, Light is so much my self that even THIS fear of being seen is borne out in its pages:

“Edward, that doesn’t matter! I was going to say, I’ve got to wonder why you wouldn’t be nervous with Chase. He’s the gentlest person I know, but it’s more than that. Is it … because he can’t see you?” William asked. Edward looked shocked and sat frozen for a moment.

“How did you know?” Edward whispered almost inaudibly.

I can’t seem to escape Light: Perhaps my own aversion to mirrors is why it became the story of a vampire’s redemption?