I’m talking with friend and fellow author, Lichen Craig today. Often the interviewer, but rarely the interviewee, I thought it was time we switched the chairs around and found out a little more about her. ~B

Can you tell us a little about your writing background?

I have been writing for many years – nonfiction up until 2012.  Sometimes I had other professions at the same time.  It all amounts to a lot of experience that helps in setting a scene!  I wrote on wildlife, environment, current events, and politics. I was fortunate to have a stellar education for it: I stumbled into the University of Iowa and the renowned Writers Workshop there. I actually double majored, with journalism, and that was great: the journalism school taught me to write tight and edit.

Where did the idea for Gentlemen’s Game come from? 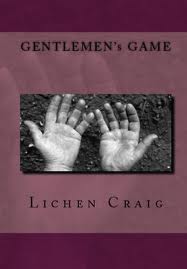 I don’t really know. I was in a place in my life where several things were haunting my mind. Chiefly was bisexuality. I had a few friends who seemed to be so lost . . . torn between two worlds: on the one hand was the straight community questioning and rejecting them, and on the other was the gay community looking down their noses at them. The idea that, because they were attracted to both sexes they were somehow in denial about their sexuality seemed awfully simplistic, judgmental, and condescending to me. I contacted a national expert on the subject, a psychologist, and learned a lot that was absolutely fascinating.  I had also been thinking about bisexual people in the closet – in heterosexual marriages, and perhaps never giving themselves permission to explore their own sexual orientations. So those things fed into it.  As I wrote, some of my own background in working with crime and abuse victims came into it.

Can you tell us a little about your writing process?

I think that perhaps I have a different process than do most novelists. I write fast. Working in journalism I never had the luxury of whining about “writer’s block” – which frankly I don’t believe in – and so I have learned through the years to put my nose to the grindstone. But beyond that, I have learned to save time and effort by forming a lot of a story in my mind ahead of time. By the time I put pen to paper, I already have a lot of the details hammered out.  So my first draft is the only draft. I make sure I understand the structure of the story ahead of actually writing. Then, I get it down on paper, and then clean it up. End of story.

I don’t use an outline. Well . . . I might scribble a very rough one, again to keep structure in mind and know where I want to end up in the end. But I don’t like to cage myself too much.  My mom writes crime mystery, and for that I think one must have a detailed outline, because the success of the story depends upon dozens of specific detail falling into place. But for what I write, I just need to know where I’m going.  But how I get there is fluid and changing.  I actually feel things coming to me – pictures go through my mind – things like a character’s facial expression, a snatch of dialogue, a room, even an emotion – those are scenes begging to be written.  Sometimes it is almost a supernatural experience, as if the characters are speaking very quietly, through images, and they expect me to write it down and get it right.  If I fight them, try to steer them in a particular direction, I find that the writing is bad.  I like to keep them on a long leash.

How had the last year been, since the release of Gentlemen’s Game?

It’s been crazy!  Gentlemen’s Game changed my entire life. I was suddenly no longer a journalist, but the author of a book that was either moving people to tears or making them really angry. A lot of discussion, fan letters, new friendships in places I never could have predicted. And for all of it I am so grateful.

That’s great. What coming up next? 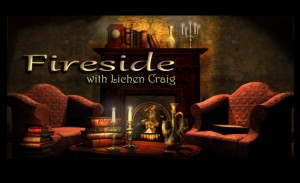 I’m wrapping up the second novel. It’s been delayed, not because I put it aside intentionally, but because the past year has been so life-changing, and I had to take on so many projects that were necessary in order to build a new career in fiction-writing. One part of that was Fireside With Lichen Craig, my feature at The GLBT Bookshelf. . . I am still amazed that they asked me to do that.  I’ve met such interesting people, and have some great interviews coming up.  I have a short story in an anthology coming out in May with Storm Moon Press. The anthology is a collection of submissions by Colorado writers of gay male-themed fiction, and all stories will be set in Colorado.  I think it’s tentatively called “Out in Colorado”.

So you live in Colorado, has that had any effect on your writing? I always picture it as such a serene place to be writing.

Yes and no. I live a quiet life in the Colorado Rockies with a bunch of big dogs. The older I get, the more peace I need. I find that I have, through the years, finally learned to love people – to love humanity for its own sake, with all its troubles and failings and foibles. Once I accomplished that, I could really write with depth and compassion.  It was tough – I was raised to be judgmental in some ways, and I had to pound it out of myself bit by tiny bit, to find a way to real compassion.  As a writer, you can’t walk around being mad about things all the time, because it blocks your imagination and saps your creativity. You have to have enough anger to write with passion, channeling it carefully. But you have to choose your wars – constant anger all over the place just ruins you.

I agree. Is there anything else you wanted to add?

I owe a debt of gratitude to other writers who have been so supportive this past year – a few have become dear friends. I also am so grateful for fans. It still amazes me to get a fan letter. People taking time to tell ME that the book moved them so deeply. Just amazing.  I have been privileged to get to know many strongly creative professionals this past year, and call some of them friends. I often have the thought – from year to year, you just can’t predict or picture in your imagination what possibilities Life can offer. Things you could never have foreseen. Isn’t that wonderful? And exciting? That’s what makes it all worthwhile.

Thanks for stopping by, Lichen. It’s always a pleasure.

You can find Lichen on her website, Twitter, and interviewing many LGBT guests on Fireside with Lichen Craig.