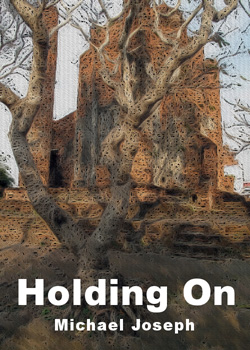 It was right around two years ago this month that I first opened a file for what would become Holding On. At the time, I thought I was just jotting down a scene that had been going around in my head for a week or so. I hoped that if I wrote it down I could get it out of my head so I could get back to work on Journey To Rai-Lay, the sequel to Journey To Angkor which I had released the year before. I figured it might be part of a short story or something I could come back to later.

This was before I had fully accepted the way my subconscious ‘muse’ worked. Getting a scene written up that’s been spinning around in my head every waking moment doesn’t make the story idea go away, it just makes room for what happens next. Before I knew it I had more than 40,000 words (about 120 pages) down, and it was some of the most painful writing I’ve done in more than a dozen years of professional writing.

Perhaps one of the most cliché bits of writing advice is to “write about what you know”. While it doesn’t explain all the vampire and werewolf stories that flood my reviewing inbox, it is still good advice. While it may be cliché, it’s not bad advice, and I did take it to heart. I had lived in Bangkok for nearly 20 years, had traveled throughout the Southeast Asia region and written about it extensively for travel and business publications, so when I turned my hand to fiction, I wrote about what I knew: Southeast Asia.

However, I wrote mainly about the past, not the present. This had a lot to do with what inspired me, but it was also a conscious decision. Bangkok is full of washed out westerners who pile up in the girlie bars in the city’s various red light districts like driftwood on the beach after a storm, many of them working on their own great expatriate novel. While I most certainly have never set foot in a Bangkok girlie bar, I definitely didn’t want to be one of those whiskey-soaked louts, who invariable have strong opinions about all the things Thailand is doing wrong. The books produced by this crowd, and there are a lot of them, are invariably filled with greedy locals, hapless foreign bar owners, and pointless trivia about things like why Bangkok street addresses are completely useless.

So, in writing Holding On I was breaking most of my own rules about what I wanted to write. What made it worse was that I put myself, or at least a fictional version of me, front and center in the story. The story is told from the point of view of David, a 40-something expatriate who has lived in Bangkok for many years. As the book opens, our hero is feeling that his life is at a crossroads. He came to Thailand thinking it was a chance to have a better life, meet a boyfriend and settle down. The reality, as is often the case, hasn’t lived up to expectations. He’s had a string of relationships that didn’t go anywhere, and he has developed a growing awareness that what he needs from a man he is unlikely to find in Thailand.

This being fiction, just when David is thinking about packing it all in is when his Prince Charming rides in on his white horse. Prince Charming, whose name is “Gun” in this case, is everything David wants, a gentle dominant who takes him in hand and gives him the strong constancy he needs. Even now I sometimes worry that I put too much of myself into the character of David. Fortunately the cloak of fiction gives me plausible deniability regarding any of David’s neurosis, although I will admit that it’s his emotional outbursts that were the hardest thing to write.

Yes, in the end, Holding On is fiction and I’m not David. I faced the same crossroads, but no Prince Charming came riding in to rescue me. Without a Gun in my life to keep me in Bangkok, my own mind began to turn more and more to the idea of ending my self-imposed exile and returning to the USA. Real life also moves much slower than fictional life. It wasn’t until the end of 2012 when health problems with my family back in Oregon helped force me to conclude that my “Thai period” was over. In February of this year I landed back in Portland, where I’ve settled in and have just landed a job.

Michael Joseph is a not-too-subtle pen name I use for my fiction work. I’ve lived, worked and traveled throughout Southeast Asia for more than twenty years. My home base is Bangkok, where I’ve lived since 1992.
I’ve been writing about travel, mostly around Southeast Asia, for more than ten years. That’s why I use a pen name. I’m not sure how my reputation as a honest reporter of travel opinion would be affected if people knew I also wrote fiction. I turned to writing fiction in 2008, when the idea for “Journey to Angkor” first hit me. Since then, I’ve published seven books and have more in the works.