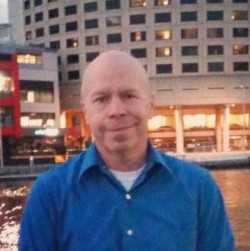 It’s always so easy for someone who’s got it made to think that the scum always chooses the darkness.

A:  Actually, believe it or not, that line stems from a personal experience but I think it applies to any situation. Years ago I went to work in a gay bar as a server and I lost friends because of it. I remember one so called friend who said to me, “I can’t believe you’re doing this, it’s beneath you.”  He said it without knowing my situation. He said it based on what he thought he knew of me. He saw a successful man in a good career and couldn’t understand why I would do that kind of work. I was surprised people I thought were friends were so judgmental over something as simple as a job. I worked as a server because I needed to. But their rejection of me left a bitter taste in my mouth. It’s easy to judge people. We all do it. I do it. Even though we all say we don’t.  In the case of Danny, my character, part of it is self loathing and part of it I think is jealousy. He meets the most beautiful man he’s ever seen and he automatically assumes this beautiful man looks at him the same way he sees himself and is going to judge him one way or another simply because he’s not as attractive. He’s a hustler, he looks poor, he’s offering sex for food. But the self loathing doesn’t come from his hustling, it comes from a hatred of the life he was given. I think we can view it all as perception, sometimes based on what society dictates and sometimes based on our own fears.  I think all of it: homophobia, bullying, coming out, the processes are all dictated by fear of the repercussions.

B: I was having a conversation on Twitter with Joseph Warren (who I have an upcoming interview with) the author of Stealing Ganymede, and both of your books deal with a small aspect of LGBT youth prostitution.  My own books deal with similar issues and we’ve both run into LGBTQ people who claim that this isn’t a part of LGBTQ existence. And I guess that kind of plays off of my first question about the privileged gay crowd and their perspective of how rough it was growing up verses the youth on the street or those who grow up without a silver spoon. Your thoughts?

A: My personal opinion is that of course prostitution and hustling are part of the LGBTQ existence. Our community is no different than society at large and the reasons it happens are no different either.  I have always found it fascinating the clicks within the LGBTQ community that we really don’t talk about but we all know are there. Segregation exists within our community and it’s undeniable and there are definitely divisions along class and wealth. It’s not the only one but it stands out more clearly than others. You’ll learn this quickly by going into a gay social bar and watching the inner workings of the people.

Being a people watcher and a server for seven years I’ve seen the aristocratic wannabes who within their click turn their noses up at those they felt were lesser people and then at closing time watch that same guy offer a twenty to the straight hustler to give him a blow job, but of course only when the rest of his click isn’t around. On the same note I’ve seen heterosexual married men come into a bar at 2:30 am looking for sex. It’s the hypocrisy of people in general. I’m guilty of it too. We want people to view us in a way that will avoid judgment. But in the dark and when we think no one is looking we let our true selves come out. But once again I think it’s just fear of how people will perceive us. Very few of us would be comfortable standing naked in front of the world. Controlling people’s perception of us is just the clothing we wear to cover up the inside. I have no desire to live up to heterosexual moral standards and let’s face it, most heterosexuals can’t even live up to them. For our community as a whole in some cases it’s the fear of what homophobes may use as propaganda against us. Let’s be honest, some members of our community are embarrassed of certain segments within our community.  This year at Knoxville Pride the mayor of Knoxville walked in the parade and attended Pride activities. It was historical. No mayor of the city had ever participated. Yet members of our community were saying they were terrified that some boy would run down the street in his underwear and embarrass us and the mayor. In other words, they hoped that boy would not be himself. So basically they wanted to shove people that might show us in a negative light into new, different closets and slam the door shut.

B: This line was another line from Snap that struck me:

The soul is the part you never want anyone to see and is the part that everyone wants to take.

A: Honestly I want everyone to take their own meaning away from the story but in this case the line you’re talking about is one of my favorite parts of Snap. So for me, this line really is about standing naked, both physically and mentally. This, with all the cheesiness I can muster, is about love. It’s about showing the real you in every single possible way, tearing all the walls down yourself and letting yourself be shown. Conversely it’s what we want of someone we love. We want to tear down those walls. We want no secrets. We want to consume every part of the person we love. But we want to be the only ones who can do it. It’s the ultimate in selfishness. I think most of us have so many walls built around us we’re scared ourselves to find out what really lies underneath. In the case of Snap we have a young sweet boy who grows up in an environment that may have led him to be a cold blooded killer. Peel the layers away and we all have to wonder if we what we find is a person capable of killing.

B: When silence was Matthew. I loved how this one line wove throughout the story and gave different connotations in almost every instance.  It seemed such an integral part of how your character tried to hide himself from the world and from his own self-condemnation.

A: It’s definitely a phrase about control. I did offer meanings to the phrases of both silence is Matthew and silence is Danny early in the book and you are right it was absolutely a way for Matthew to avoid answering a questions about himself or justifying his actions. When silence was Matthew he was creating his own environment where he could deny his lust for revenge. He was controlling information and in a peculiar way he was protecting Danny. And when you think about it Matthew is the type of personality that couldn’t stand for anything to be out of his control. I like the phrase also because silence in its own way is an answer to many questions. I can’t count the number of times I’ve used silence instead of words to answer a question.

B: I could pull little clips out from Snap all day long, it was just a treasure trove of eclectic insight, but let me finish with this one and hear what you have to say about it.

Not saying is the cruel of honest; it’s the honest we hope we never hear. The silence that is I don’t.

A: It’s so funny, I think I’m going to sound like a fucking romantic or something like a valentine when I answer this.  You really picked some of my favorite lines from Snap and interestingly enough the most personal. In my opinion most of the time we don’t want the truth, we don’t want honesty. Honesty doesn’t go away, honesty is painful and it feels cruel sometimes, you can’t erase it. When it’s done, it’s done. It can’t be taken back. I don’t always like honesty and I don’t like being honest all the time because honesty will hurt the person it’s directed toward. In the context of Snap, Danny says to Matthew I love you and Matthew deflects by saying something to the effect of I think you do instead of saying I love you too. This is the not saying that Danny is referring to. To Danny this is the silence that means ‘I don’t love you’ and that’s the phrase none of us want to hear.

B: You have a new book you’re working on called The Falling. Tell us a little about it, when it’s due out and what we should expect.

A: The Falling is the sequel to The Raised and hopefully it will be out in December of this year. I was really hoping for October but that’s just not going to happen. The Falling picks up right where The Raised leaves off.  The Raised basically is Nicolas Morrelin’s confession of the crimes and sin committed against Adam O’Brien and his family with the explanation of how the tragedy came to be. I think it has a great ripple effect that leads nicely into The Falling.

The Raised and The Falling are my love children. Ever since I first tried my hand at writing when I was 10 years old I wanted to create an epic series. This is my version of it. The Raised reflects my split personality when you compare it to Snap. Snap is such a fast moving story with a play on words and The Raised is my effort at literature for lack of a better word. The series follows the Morrelini family and their unraveling. It’s a supernatural thriller series with biblical references, there is plenty of violence, secrets and homoerotic themes. I’ve taken some criticism for the story which fringes on molestation and incest but it is for the sake of understanding a greater mystery. But I’m used to criticism. And where would an epic story be without a villain who believes himself to be a god?  The Falling will provide most of the answers to the questions that remained in The Raised. Most but not all.

B: Well I better get my butt in gear and get to reading The Raised then. Thanks for stopping by Allen.