Welcome Todd Young to the blog with an excerpt from his latest, Naked.

Todd Young’s first book, Corrupted, was released in 2010. Since then he has published five other titles, most recently, Angel, a companion to the “beautifully psychotic” Subject 19. His work sits on the borderline between gay erotica and m/m romance.

Essentially, I’m writing erotica, but I want it to be as engaging as any other type of fiction. I don’t see any reason why a book should lack in terms of storyline, characters, theme or any other aspect merely because it contains sex, as though this in itself were some reason to deem the book unworthy.

While my stories are sexual fantasies, rich in absurdism, I work hard to imbue them with a deeper meaning and a quality of unexpectedness. I’d like the reader to close the book with the sense of having read something worthwhile.

Naked, my shortest book, is my current favorite. I’m pleased with it’s complexity and the way the plot is revealed. As one reviewer put it, it’s “creepy and deeply unsettling.

In this scene, Leigh has broken into a strange house. 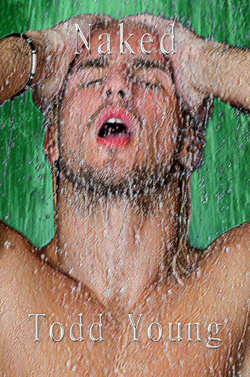 The staircase creaked. Leigh slid along the drywall, his head turned toward the light spilling onto the staircase from the window on the landing. As he neared the second floor he squatted, and then climbed a little further, spread-eagled on his hands and feet.

He lifted his head and peered through the banisters.

No one — on this side of the hall at least. The staircase rising above his head blocked anything that might be lurking at the foot of it.

But the music sounded as though it was coming from the attic. Definitely from the attic, Leigh decided, as he stepped onto the landing and stood with his back against the window.

The hall was empty.

Two on this side, and one at the foot of the attic stairs.

He expected one of them to open at any moment, and he prepared to run, to flee down the stairs and into the forest.

He glanced over his shoulder and saw the Land Rover, sitting idly in the yard, its roof a little rusted. Behind it, a muddy drive climbed into the woods.

Leigh felt as though he couldn’t move. His knees stuttered, tapping one another. He moved his feet apart, but his thighs slid together. He glanced down the steep staircase, but it made him feel as though he would fall. So he lifted his head again, his ass against the cold window, and stared at the static hall.

The Logical Song ended, began again, and Leigh felt suddenly certain that there was no one here but the guy, and that he was upstairs.

He knew he had to move forward and open a door. One of them would be a bedroom. There would be clothes. And he needed to get something now.

Yet he thought of the rug in the living room. Thought that he could take that, tear it somehow, and wrap it around himself.

It was a stupid idea.

He pushed himself away from the window, and managed to stand. He swallowed heavily and took a trembling step forward. Cautiously, he twisted the handle of the first door and pushed it open.

The door creaked inwards to reveal a bathroom. A claw-footed tub. A toilet. A porcelain basin. And hanging beside the basin, a hand towel.

Leigh stepped into the room and glanced behind the door, expecting to see a bath towel. There was a rail, but it was empty.

He was about to walk back into the hall when he heard the sound of footsteps on the stairs. He closed the bathroom door and backed toward the basin, expecting the door to open at any moment. Without thinking, he reached for the hand towel and pressed it against his groin.

The footsteps creaked along the hall, passed the bathroom, and disappeared, thumping rapidly down the stairs. The music was loud now, too loud, and Leigh imagined a door upstairs standing open.

From downstairs, unexpectedly, came the sound of someone singing, of someone wondering what Leigh would say if he called him a radical.

Leigh struggled to match the voice to the guy he’d glimpsed at the 7-Eleven, but he was unable to do so.

For some reason the singing reassured him.

It sounded so — honest.

But that couldn’t be right.

The voice drifted outside and wandered away. And then Leigh heard the motor of the Land Rover chug, chug again, and as he closed his eyes and prayed, it chugged a third time.

Then it caught, and the Land Rover was roaring away from the house.

Leigh bent forward and dropped the hand towel, his arms crossed over his stomach. He felt sick with adrenaline, and sick with the sudden relief.

He sunk to the floor and knelt on the tiles. Then he sat on his feet and collapsed sideways. He fell onto his shoulder and cradled his head in his hands. A sudden burst of pee escaped him and he stifled a hopeless laugh.

He was going to have to get up. He couldn’t simply lie here. But he felt unable to move.

In his mind he pictured the Land Rover moving away from the house, dappled light flickering over the rusted paintwork. Sunshine. And at the wheel, someone faceless.

Leigh is young and blond and beautiful and living a quiet life on the farm with his family. Only his dad left at Easter, and considering how things are with Blake, his closest, most attractive and too affectionate brother, Leigh isn’t at all happy, though he perhaps doesn’t know it.

It takes a ride into the hills, a skinny-dip in a stream and a meeting with a stranger before Leigh understands exactly where his life has gone wrong. But by that time he’s locked in the attic of an old, twisted house, miles from anywhere, naked.

Paul, his captor, has a story to tell Leigh, a story that will challenge what Leigh thought he knew about himself and his capacity for love.