As many of you already know, I am a LGBT Youth advocate and donate half the proceeds from The Value of Rain to help two local nonprofit organizations whose dedication and goals match my own. Occasionally I post updates here about what they are doing and how they are affecting the LGBT Youth community.  Considering the age of both of these organizations, what they have done in such a short time is nothing less than phenomenal, and it is exactly why they will continue to get my support.

GLBTAYS – Launched an anti bullying initiative (join the cause) that reached over 150 teachers and administrators in the rural Alabama area. This IS significant, as often teachers have no resources and are on the front lines of prevention programs dealing with bullying, discrimination and sadly, suicide. If you look at nearly all the cases over the last year, the predominant outcry from those that took their lives was what was happening in school and how nothing was being done. James and the GLBTAYS organization are working very hard to prevent that  from happening in rural (and very conservative) Alabama, which, ironically, is also one of the biggest communities of same-sex households in the country. (DONATE) This is in addition to the support outreach, safe space program, homelessness prevention, and a multitude of other services being offered by their organization.

Saint Lost and Found – Where do we start? Rick Westbrook and all the others at SLF have already helped over 20 LGBT kids off the streets of Atlanta and now have a house to put them in. (pic below).  I was in tears reading their account of rescuing a 16 year old that had been locked in a cellar because he was gay. The police forced his parents to take him back after he ran away. And now maybe you can understand why these kids won’t go to the cops, who, by law, must return them to the hostile environments from which they were running in the first place.  In addition to the many fundraising activities going on to support this cause, SLF volunteers are taking to the street to seek out and find the LGBT kids most in need.  For those of you that aren’t local and are reading this, Atlanta is very much like New York City, a mecca for LGBT teens escaping from bible belt homes. Unfortunately, unlike NYC, it has very, very few resources for them and is one of the most hostile cities in the country when it comes to the homeless.  (DONATE)

Both of these organizations could use your support, whether you offer financial help, donated goods, or donated services, they are very much appreciated and put to almost immediate use. 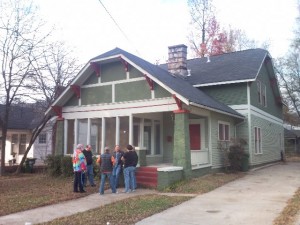